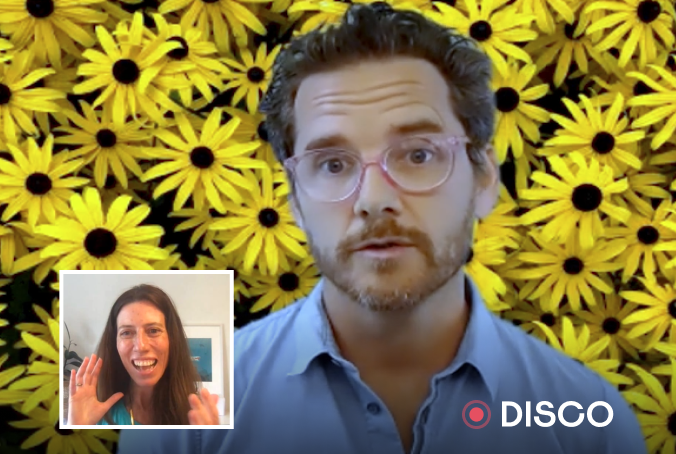 The climate crisis poses the greatest danger that modern humans have ever faced. Environmental experts believe that meaningful change requires action from governments and corporations. Paradoxically, though, individual people hold the real power to drive change - large organizations rarely shift their practices until a growing percentage of the population expresses their will.

Graham Hill knows a thing or two about building social movements that scale. A pioneer of digital communities, his previous ventures - like TreeHugger and LifeEdited - inspired large audiences to pursue greater joy and contentment in their lives.

Graham's latest project is called Carbonauts in Training - "the best course on the planet, for the planet!" Using a cohort-based course with live learning experiences, Carbonauts helps people slash their carbon footprints.

On April 8, Graham spoke with Disco co-founder Candice Faktor about developing courses that not only raise awareness about environmental issues, but also empower participants to make a difference. Later that evening, the conversation continued in a lively session on Clubhouse.

Carbonauts was originally envisioned as a series of written guides that people could use to evaluate their carbon footprints. But turning the material into a live learning course seemed like a more effective way to build a social movement of sustainability-minded citizens.

In this short clip from our conversation, Graham outlines his vision for a course that can mobilize change:

The Carbonauts program focuses on the "Big Five" impactful steps that people can take to reduce their carbon footprint. When brainstorming the structure of the course, the Carbonauts team decided to dedicate one class to each of those big ideas. The five classes are delivered via weekly livestream sessions; participants complete the program in less than 30 days.

Determining the logical number of classes - as well as the optimal number of participants - requires careful balancing of multiple factors: the quality of the learning experience, the viability of the financial model, and more.

The Carbonauts settled on a cohort size of 15-20 participants. A grouping of this size was large enough to foster a vibrant sense of community, yet still small enough to ensure interactive participation and personal accountability.

In particular, Graham emphasized the idea that anyone running a course should allow enough time for people to communicate their perspectives, experiences, and feelings.

Sharing is the one really, really, big, important part of these live classes. Getting people to talk about their challenges and their successes - that has tremendous impact. There's something very powerful about getting people to verbalize their commitments in front of a shared community.

We are thrilled that the Carbonauts 2021 courses will use the Disco platform.

Check out the full session below: